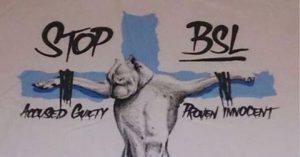 Monika Courtney had something on her mind and she wanted me to know about it.

The Evergreen freelance writer and self-described “animal advocate” was upset about a headline she saw on a Denver television news story: “Pit bull attacks 6-year-old girl.”

Courtney didn’t deny the incident happened. But the outspoken opponent of legislation banning a specific breed of dog didn’t believe the breed would have been mentioned if it were something other than a pit bull — that’s if the story had even been done in the first place.

In short, she believed the media blew it. She’s not the first person I’ve encountered who feels that way. In fact, pit bull supporters in general seem to think the media has helped stereotype the breed as vicious and dangerous while failing to offer other views or context, such as whether or not the pit bull owner’s negligence is to blame for an attack.

So I asked Courtney to explain why she felt that way. Here, in her own words, edited for space, is what she e-mailed me:

“Hasn’t the success of the press been credited to selling stories, when they are decorated with a hyped, sensationalized headline to stir our emotions? Haven’t we all been susceptible in reading these before those that are mainly based on facts and truth? In regards to breed bans, I think yes. America’s once most favorite
dog, the pit bull, has been scapegoated as a Godzilla, suffering greatly due to misconceptions, hyped exaggerations, hand-me-down myths and bloody components …

“For years the general public has been spoon-fed this portraying, which tastes like a sour meal to those who truly know the facts, have done the research, and realize that America main stream has been deceived by a movement of selling hysteria, resulting in the murder of thousands of innocent dogs, the irrational contention that breed bans ‘protect’ the safety of the public … and the outrageous hidden costs to enforce such radical legislation, funded by your tax dollars …

“Whilst we all strive for safe cities, the real damage that has been done with BSL (breed-specific legislation) has not been portrayed much by the press. Families having to flee cities, a steady increase of dog bites during ban periods, a lack of interviews with experts, the negative economic impact of costs of BSL and
mostly: the failure to cover stories pertinent to all/any breed, including all circumstances, which are key to analyzing the true cause of any attack …”

“The press has lacked greatly in being part of a solution to improve the public’s safety, by reporting one side mostly, which is the one that sells…”

I know that press-bashing is not all that unusual. So why give so much space to one critic?

Because in the past few months while researching stories about pit bulls, I’ve heard the same thing from a variety of sources.

For example, there’s this web item from theAmerican Society for the Prevention of Cruelty to Animals:

“Animal control officers across the country have told the ASPCA that when they alert the media to a dog attack, news outlets respond that they have no interest in reporting on the incident unless it involved a pit bull. A quantitative study by the National Canine Resource Council of dog-bite reportage in a four-day period proves that anti-pit bull bias in the media is more than just a theory — it’s a fact.

August 18, 2007 — A Labrador mix attacked a 70-year-old man, sending him to the hospital in critical condition. Police officers arrived at the scene and the dog was shot after charging the officers. This incident was reported in one article in the local paper.

August 19, 2007 — A 16-month-old child received fatal head and neck injuries after being attacked by a mixed-breed dog.This attack was reported on twice by the local paper.

August 20, 2007 — A six-year-old boy was hospitalized after having his ear torn off and receiving a severe bite to the head by a medium-sized, mixed-breed dog. This incident was reported in one article in the local paper.

August 21, 2007 — A 59-year-old woman was attacked in her home by two pit bulls and was hospitalized with severe, but not fatal, injuries. This attack was reported in over 230 articles in national and international newspapers, as well as major television news networks including CNN, MSNBC and Fox.

A couple of months ago, I sat down with members of the Coalition for Living Safely with Dogs. This is an group with representatives from mainstream animal welfare organizations in the Denver metro area, who are trying to inject evidence-based information into the pit bull debate.

Some of the coalition’s members complained that the media often fails to provide context when reporting dog-bite incidents. Most often, they say, the owner is to blame because of improper care or control of a dog. But it is the animal that pays, sometimes with its life.

Member Nick Fisher, the CEO of the Humane Society of the South Platte Valley, suggested a book by Karen Delise, a former veterinary technician, as a reference.

The book, “The Pit Bull Placebo: The Media, Myths and Politics of Canine Aggression,” argues that “our perceptions about the nature and behavior of dogs has been influenced and shaped by persons and organizations who often times disseminate information about dog attacks which is tailored to further an agenda unrelated to the improvement of the human/dog bond.”

The book further argues: “We have come to be in the midst of a social hysteria about pit bulls because we have abandoned centuries-old common sense and reasoning and have been duped by inaccurate reporting from a media that thrives on sensationalism … There is a disturbing scarcity of accurate information and investigation done on the real causes and reasons for these incidents.”

I wondered about my own newspaper, The Denver Post. I checked the paper’s online story database and got 20 hits when I typed in “dog attacks” for the last five years. Of those 20 stories, eight had headlines that included the words “pit bull,” one that included “rottweiler” and the rest did not include any breed.

That’s not the end of the conversation, of course. Copy editors, who write the headlines, base them on the content of stories. They can hardly be expected to write “poodle” or “chihuahua” on a story about pit bulls.

Reporters, for whatever reason, have become accustomed to the notion that stories about pit bull attacks are newsworthy. How did it start? Perhaps in the 1980s, when pit bulls started to be identified with gang life.

Spokesmen for law enforcement organizations soon learn which types of stories reporters are most interested in, and make sure to provide that information.

Media staffs have shrunken in the face of the economic turndown. That certainly makes it harder to do the sort of reporting — on a tight deadline — that adds context to a story.

And maybe we’ve become too dependent on telephones and computers and need to spend more time getting out of the office and talking to people.

So what do we do about a complaint such as Monika Courtney’s?

Tom Cat Tomfoolery — Got a most unusual enclosure in a press release from Amy Angelilli, executive director of the Rocky Mountain Alley Cat Alliance: Tom Cat condoms, cat-size birth control products with this legend: “Prevent a litter, cover your critter.”

The condoms aren’t real, but they’re an attention-grabbing way to spotlight a real problem. The warm weather months are “kitten season,” and there are just too many cats to deal with these days.

“While these condoms cannot prevent a litter, spaying or neutering does,” says a message on the back of the condom package.

It’s all a promotion for the Denver-based Alliance’s “Beat The Heat” promotion. The Alliance is marking the first anniversary of itsFeline Fix spay/neuter clinic. Cat guardians will receive a discount on surgeries when they mention “Beat The Heat” while making a reservation for their feline to be fixed.

The Alliance is hoping to lower the number of cats euthanized in Colorado. There were 24,000 in 2008.

Cause for Paws — Registration is now open for the 21st Annual Cause for Paws Doggie Dash, a benefit for the Humane Society of Boulder Valley. The event, from 7 a.m. to noon on Sept. 11, welcomes dogs as well as runners. The 4K run is an official Bolder Boulder qualifier. The humane society is hoping that every person who participates in this year’s run will commit to raising $325 in pledges from friends and family. That is the average amount that the society invests in every animal that comes through. Information:boulderhumane.org/causeforpaws or call 303-442-4030 x634.