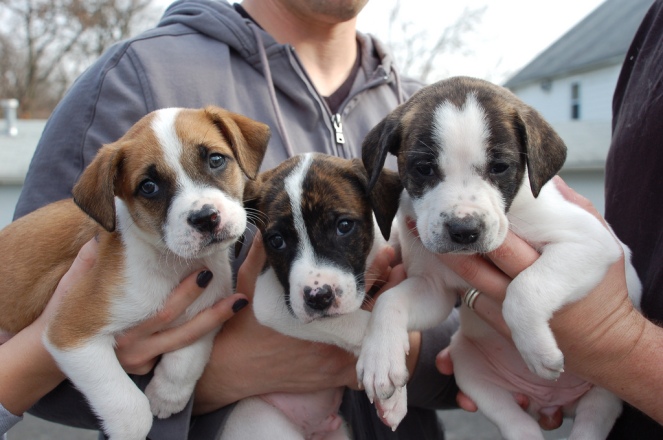 About two months ago (9/2013), I was driving home from Frederick at about 2 a.m., and I passed a specter on the side of the road. At least I thought so, because it was hard for me to believe that I had seen what I thought I saw. I pulled over to the side of the road and backed up slowly and found a dog — an emaciated, scared, hurt, bleeding dog on the side of the road picking through a white trash bag.
I approached her carefully, but she just collapsed when I got close enough hold out my hand for her to sniff. I picked her up and carried her to my pick-up truck and placed her carefully in the front seat. When I got into the driver’s side and saw the blood on my clothing, I knew I was in for a long night.

I called a good friend who is experienced with animal rescue. Together, we took her to Rocky Gorge Animal Hospital. It was after 3 in the morning when we got there, and the vet on duty confirmed what was obvious to us — she was a dog who had been used in a dog fight (most likely as a bait dog due to her submissive nature and the fact that she was so malnourished and abused) and was then dumped like trash. This had not been her first fight, but the vet cradled her head and whispered to her, “But it will be your last fight!”
The journey to bring her back to good health has been long, expensive, and heart-breaking, but she is a sweet and loving dog even though she has never known human kindness and has survived a hell on earth that few people could possibly imagine. She is a pit bull. She was abused, starved, and then was left to die on the side of I-270, but in just two months she has slowly started to trust that there are some people who won’t hurt her. She has a sweet and non-aggressive nature which is why she was starved and dumped rather than used as a “star” by the dog fighting ring that treated her so horrifically.

Tony Solesky has endured a tragedy (“Making rescued pit bulls pets is an unnatural selection,” Nov. 14). There is no doubt about this. The dog that attacked his son was kept in alley, in a small enclosure that was too small for the dog to even stand up or turn around. The dog was not socialized or treated humanely by his owner. The Solesky child admitted to teasing and throwing rocks at the dog. Although this does not mitigate the tragedy of the dog attack, in a better world this dog would have not been treated so horrifically and neighbors would have reported the abusive treatment to proper authorities who would act on the complaints, rather than throw rocks and tease an abused animal. I believe in this better world.

According to the ASPCA, there are approximately 80 million dogs in the U.S. Because pit bulls are not anAKC-recognized breed, and because DNA tests have shown that pit bull is more of a type of dog than a breed (encompassing up to 20 different breeds of dogs), tracking the number of dogs that could potentially be labeled a pit bull is impossible. It is not unreasonable to assume that the number of pit bull type dogs in the U.S. would number in the millions. According to the Centers for Disease Control and Prevention, there are less than 35 dog bite-related human fatalities each year involving over 20 breeds of dogs, and this statistic has remained consistent since the 1970s. The breed of dog on the top of the CDC report has changed through the years based on the popularity of different breeds, but the overall number has remained relatively consistent for almost 40 years.

Focusing on breed has no positive outcome.

Focusing on the factors that are consistent across all breeds (such as spay/neuter, proper socialization, and targeting chronically bad owners) has been proven time and time again to lower incidents of dog aggression. This is why not one reputable animal advocacy or veterinary organization advocates for breed specific legislation.
Mr. Solesky cited a CDC report on dog bite-related fatalities by breed, but failed to note that the same report clearly states that dog aggression is a human issue, not a dog issue and the CDC stands firmly against breed specific legislation and advocates for more humane laws for animals, enforcement of existing laws, public education (especially concerning children and animals) and targeting of chronically bad owners.

There are many, many false statements in Mr. Solesky’s commentary and the CDC, the ASPCA, the HSUS, the American Veterinary Medical Association, and every reputable animal advocacy and veterinary organization in the U.S. disagree with statements such as “Pit bulls were bred to be fighters, both physically and in their instinctual behavior, making them a dangerous choice as a companion pet.”
The AVMA states on their website, “…controlled studies have not identified this breed group [pit bull type dogs] as disproportionately dangerous….” The ASPCA states, “…a well-bred, well-socialized and well-trained pit bull is one of the most delightful, intelligent and gentle dogs imaginable.” The HSUS states, “Singling out a particular breed or type of dog has repeatedly been proven to be ineffective because breed alone is not predictive of whether a dog may pose a danger.”

There are good people who go to shelters or rescues and pick the dog and take their new companion home and make him a loved and cherished part of their family. These dogs live out their lives in peace with their families, never posing a threat to another animal or human being. The judges in the Solesky case devastated the lives of many families when they were forced to leave their family pet at a local shelter to be led to a dark room, put on a steel table, and given an injection that ended his life — alone and scared. These dogs posed zero threat to public safety, had good homes with good owners and the misguided and poorly-considered Solesky ruling put these innocent family pets on that steel table for no logical or explainable reason.

I choose to read and listen to studies published by the CDC, the American Veterinary Medical Association, the HSUS, and the ASPCA, all of whom can find no statistical evidence that dog aggression has any relation to breed. I choose to be part of the solution by advocating for stronger laws against dog fighting, irresponsible breeding, and leash and enclosure laws that protect both humans and dogs. I choose empathy. I choose to stand up to people who abuse and neglect dogs. In doing so, I make the world not only a better place for animals, but for people as well.
I live in Montgomery County, not Baltimore, and Montgomery County has laws that govern enclosures and tethering of dogs. Because of these laws, the owner of the dog that attacked the Solesky child would never have been able to legally keep his dog in such inhumane conditions in Montgomery County, which would have prevented the tragedy that befell the Solesky family. I advocate for institution and enforcement of such laws, and the institution and enforcement of laws ending dog fighting and back yard breeding, and that encourage spay and neuter and responsible ownership.
The starving, abused, half-dead dog that I picked up on the side of the road will be OK. She has already started to physically heal, and her emotional healing will eventually catch up with her physical healing. She is not the first rescue in my life and she is not the first pit bull — and she won’t be the last, either.

With everything that these dogs have to endure in this state — dog fighters who starve them and then throw them on the side of the road like trash, judges who ignore reports and statistics published by the federal government and the largest veterinary medical association in the world in favor of hysteria and misinformation, people like Mr. Solesky who cling to ignorance and use a personal tragedy as a tool to cause immeasurable and unnecessary suffering to other families, and greedy ambulance-chasing elected officials in Annapolis who put their personal law practices and bank accounts before their oath of office — it seems to me that these dogs have much more to fear from the ignorance of human beings in the state of Maryland than we have to fear from them, and I’ve seen it firsthand.

There hasn’t been a dog bite-related human fatality in Maryland in over seven years, but we are killing these dogs by the tens of thousands, thanks to an ignorant ruling made by lazy judges, and a state assembly full of self-serving elected officials.
It’s time for the state of Maryland to stop clinging to hysteria and ignorance. It’s time to overturn the Solesky ruling with common sense legislation that removes landlord liability and does not single out any breed of dog.
By….. Colleen Anne Carrigan
More to come…..