Skip to content
How many times do we hear from BSL advocates that “pit bull” attacks/fatalities come out of nowhere- especially pertaining to tragedies involving children? Over and over again- right?
Considering many of the DBF involving children involve the factor of parents not supervising and many times not even in the same room as the child and dog how do we know that claim is even true? How many of these dogs had PREVIOUS aggression issues? When dogs attack are there signs and why do we ignore them? Can we tell what really happened via media? We can’t and that’s the problem with generalizing dog attacks.
Case 1. Je’vaeh Mayes
“The toddler slipped out of the house and into the backyard where the dog was chained. ” The dog was chained with puppies.
Was this tragedy out of the blue or are there other reasons for this tragedy? According to the statement from Dogsbite.org about the setting of the attacks- it doesn’t take a rocket scientist to figure the probability of something tragic happening in many of the cases.
Dogs who are about have puppies or who are currently nursing or caring for puppies are going to be acting under the influence of powerful hormones.
Bitches with pups may be more aggressive for all the same reasons as queens. Those that are more dominant and controlling prior to whelping will be more likely to show this type of aggression. This sort of aggression is really a hormonally enhanced version of dominance aggression in which the object being protected is the litter.
Dogs tethered for long periods can become highly aggressive. Dogs feel naturally protective of their territory; when confronted with a perceived threat, they respond according to their fight-or-flight instinct. A chained dog, unable to take flight, often feels forced to fight, attacking any unfamiliar animal or person who unwittingly wanders into his or her territory.
Chained Female large powerful dog + puppies + unsupervised child = tragedy waiting to happen.
Case 2. Braelynn Coulter
“”family spokesperson said the child was “playing when the dog suddenly attacked.” A neighbor spoke out right away, saying the dogs had exhibited aggression in the past.””
According to Dogsbite.org (which I’m using so BSL advocates can’t argue with the legitimacy of the source.) this dog has had a history of aggression. I know DA does not equate to HA however- this dog broke through a fence to get to a dog walking by. Why would you let your small child play with it? Was she alone? How would we know?
Small child + aggressive dog = tragedy waiting to happen.
Case 3. Dorothy Hamilton
“The victim’s son told police the dogs were normally locked in a bedroom. Neighbors had complained about the dogs running loose and acting aggressive in the past. “
Eight pit bulls. Eight pit bulls known to be very aggressive. So aggressive that they felt the need to lock these dogs in a room.
No clues? No hint? No idea that these dogs would attack? Come on…
Case 4: Nyhiem Wilfong
“the older brother had suggested playing with the chained dog. Family members said they have only had the 100-pound rottweiler, named Kobe, for three weeks “
A 1 year old child alone- with another young child playing alone with a chained large new to the home large dog. Will someone please tell me how this “out of the blue”? But as I was reading a bit more- I find it interesting to see Colleen Lynn doing some “victims bashing” according to DBO members. 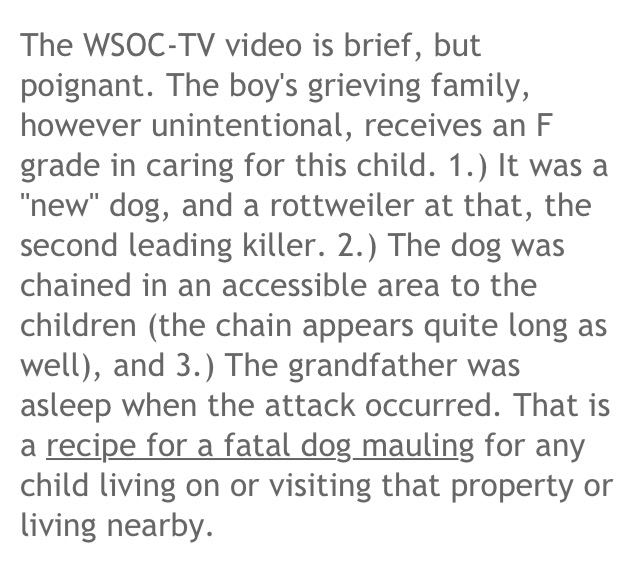 Whaaaaat? You mean this is the ONLY case out of list of 2014 DBF’s that get a big fat F in child care? Would Colleen be singing a different tune if the dog was a pit bull? Well duh.

Keeping it classy Borchardt. A child is dead because of negligence & irresponsibility (which Jeff should know how that feels thanks to Iwiki.) and he wants to mock the tragedy by promoting his disgusting propaganda? Of course he does.

If you truly look at each case surrounding fatal dog attacks- regardless of the breed- it’s never out of the blue especially when it comes to children. 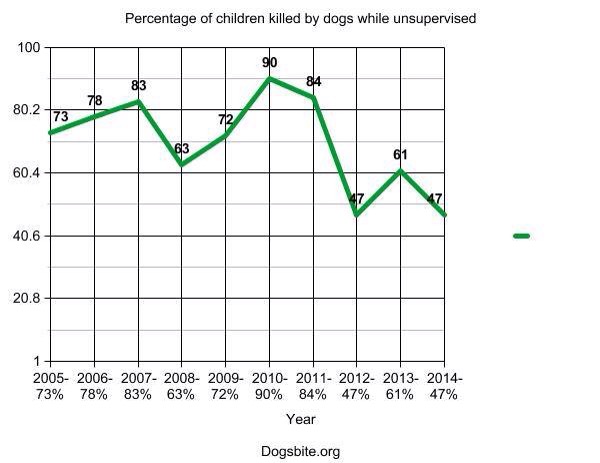 I mean- come on folks, in 2010- 90% of Dog Bite Fatalities involving children happened because of parents not supervising their children. This isn’t a breed issue because this pertains to all breeds. Wake up folks. You can ban all the dogs you want but that doesn’t change the fact that children will continue to die if parents and dog owners do not step up and start being responsible.
It’s not complicated only DBO makes this sh@t complicated. (Oh- one more thing: pointing out the simple fact that the majority of DBF’s can be prevented and by showing what failed ( either on a parental level or professional level) is not victim blaming. It’s educating future dog owners so they don’t make the same mistakes. )
By Zombies & Dogs……