It’s high time DBO were  made accountable for all the lies and misinformation they peddle in order to achieve their end game, which is the death of all “BULL” type breeds of dogs… especially under the especially using the disguise of a “victims advocacy” to kill, stalk , harass and bully?

Dogsbite is synonymous for calling mixed breed mutts pit bulls so there’s every possibility that these numbers are a lot higher than Dogsbite is claiming.

A recent study of dogsbite’s statistics discovered they regularly misrepresent the breeds involved in fatal attacks in order to justify their stance supporting and promoting Bsl.

Tyler Trammal is a good example he was attacked and killed by his sisters mixed breed dog that dogsbite claims is a pit bull when in fact the dog had anything up to 5 breeds in it’s ancestry including shepherd.


Below I’ve found the post about the pups when Alexandria decided to keep 2 of them and as you can see they are four to five variety mixed breed mutts including Staffy, Shepherd and Pit bull.


Dogsbite.org claims that pit bulls attack and kill because of their fighting dog heritage but when confronted on it they have no answer for one simple question……

If pit bulls attack because of their “genes” then how do explain all the deaths involving “non pit bull type” dogs? 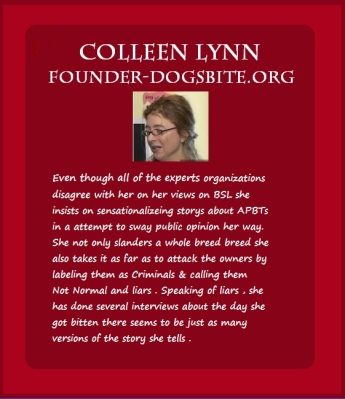 I’m not expecting an answer from Colleen Lynn as I know she can’t answer my question for the simple fact that the majority of her claims like this one are absolute garbage as she has no formal training in canine related issues she’s a media designer.

A quote from Colleen Lynn…..

“One of the greatest fear’s I have now is: What if my medication stops working? But because I am on medication, I only have this thought once, then it floats away, like I have just let go of a balloon. There doesn’t seem to be a downside to taking the pills. And my boyfriend, without hesitation, says that I should keep taking them.”

Lynn media Colleen internet company is behind the majority of the pit bull hate sites as she hates pit bulls and their owners…..

Dogsbite until recently had a disclaimer on their site advising people not to use their material in favor of actual professional advice…..

Once we started telling people about it dogsbite removed the disclaimer and they’ve really started not to care that people know they are being deceptive and misrepresenting the breed involved in fatal attacks…..

The regularly misrepresent dogs as being pit bulls when clearly they are not this dog for example they’re claiming was involved in the fatal Atlanta attack involving 2 small children on their way to a bus stop and as you can see while this dog may well be a pit bull mix it was not involved in the attack.

As you can see in their post below they’re claiming this dog is a pit bull whereas even a novice can see that dog is either of American Bully or American Bulldog ancestry not an American Pit Bull Terrier….. 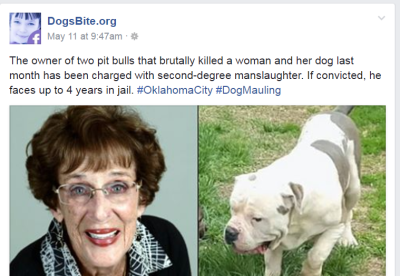 These dogs were involved in a fatal attack on an elderly woman and dogsbite needed for them to be pit bulls and called them pit bulls in spite of the fact they’re obviously not pit bulls?

In the post below dogsbite once again claimed the dog involved in the attack on 2 children in a minivan was a pit bull but just a little investigation reveals the dog was actually a “mix breed” and it seems as though dogsbite just doesn’t care about truth and facts?

“Police say that the 5-year-old pit bull terrier mix broke through a fence near where the van was parked, jumped inside the vehicle and attacked”


Some of their claims are verging on madness in this post they claim that South African Boerboels are actually pit bulls when in fact they’re from a completely different breed group all together pit bulls being in the “Terrier” group and Boerboels are in the “Molosiss” group. 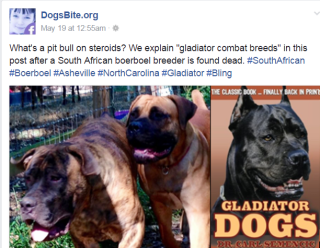 Dogsbite claims they have the support of the majority of Americans whereas the truth is they have little to no actual support as you can see this fundraiser was active for over 6 months when I screenshot it and only 23 people had donated to their cause and 23 out of over 300,000,000 people is not a majority to say the least?

Dogsbite has no active programs focused on actual victims and their followers even have to download and print their own dogsbite fliers so where do all the donations go, do they pay Merrit Clifton for his so called statistics?

So are dogsbite actually paying Merrit Clifton for his services in spite of the fact that he has no formal credentials in the fields of either data gathering and/or data correlation…..

His so called studies are not worth the paper they’re written on as they’ve never been presented for review among the proper channels and dogsbite is the only organization that quotes them…..

The sad reality is that Breed Specific Legislation has no discernible effect on either overall bite statistics or dog bites in general.

What Dogsbite really means is they want to prevent attacks involving pit bulls as the legislation they support and promote does nothing to prevent dog attacks unless they involve pit bulls…..

Here’s just a few links regarding the effectiveness of breed specific legislation…..

Dogsbite has been extensively debunked and has a long list of detractors that have successfully challenged every one of their crazy assertions in relation to the alleged dangers pit bulls present to the community.

Below I’m posting the first 5  results from the google search for “debunking dogsbite”…..

The Truth Behind Dogsbite.org – KC DOG BLOG – Toellner Tells it

Equally Merrit Clifton too has been extensively debunked specifically his dodgy studies have been exposed as mentioned earlier this man has absolutely no qualifications to be undertaking such “studies”.

Merrit Clifton Debunked: The Clifton Report has been debunked

The Academic Impostor Behind the Pit Bull Hysteria | HuffPost


Anyone still quoting these fools in the face of all this evidence indicating that they’re not very truthful and they regularly promote untruths really need to do some legitimate research it’s become increasingly obvious they these people care more for killing pit bulls then they care for victims as they constantly post and share dangerous disinformation which is leading some community members to fall into a false sense of security falsely believing their children are 100% safe so long as there’s no pit bulls around and the 128 victims to non pit bull types between 2005 and 2015 are testimony that this is clearly not the case…..

If you truly care for dog bite victims and want to help prevent more victims please support and promote the “Calgary Model” which has proven to suppress the alleged current dog bite epidemic every where it’s been enacted…..

2 thoughts on “Dogsbite.org – needs to have their non profit status revoked for promoting dangerous disinformation and propaganda…..”