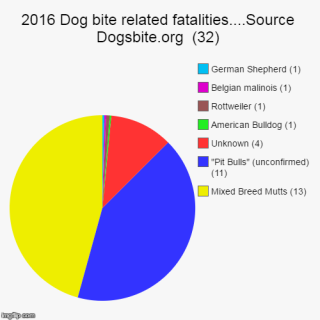 Tyler Trammell-Huston, 9-years old, was brutally killed by his sister’s three pit bulls after she left him alone with the dogs. At the time of the attack, Tyler was staying with his half-sister,

The post below was found ion the victims sister’s Facebook page over a year ago and confirms the dogs involved had up to 4-5 breeds in their lineage.

The fact is being as this dog was a mixed breed mutt not covered by breed specific legislation obviously Bsl could have done nothing to prevent this tragedy and surely when an infant this age is left unsupervised with any canine how can the canine be blamed for what is clearly a lack of adequate supervision by the infants carer.

Payton Sawyers, 15-months old, suffered life-threatening injuries after she was attacked by a pit bull-Rottweiler mix while under the care of her babysitters on January 6.
Source….. http://www.dogsbite.org/dog-bite-statistics-fatalities-2016.php

Talan was left unsupervised playing in a field near a shelter that housed a mother and her puppies which undoubtedly triggered the attack and once again no expert witnesses just neighbors and non experts so it’s more accurate to say the tragic attack involved a dog “alleged” to have been a pit bull however no confirmation was undertaken by dogsbite.

It’s interesting to note that the victims mother has a drug problem and actually fled town with the donations raised from the public for the child’s funeral not even attending the service indicating that there was more at play then the “breed” of the dogs involved these children were left unattended by their drug addled mother and the victims other siblings were taken into care after the tragedy.

Again another tragic case of a parent believing the propaganda being spread by dogsbite.org this parent believed her infant was 100% safe because her dog was not a pit bull?

Aiden Grim, 3-days old, was fatally bitten on the head by a family dog

Aiden Grim, 3-days old, was fatally bitten on the head by a family dog.  Labrador-shepherd mix

Another case where a dog is being called a pit bull whereas it’s an 100lb mixed breed mutt  (pit bulls grow to a maximum of 65 lbs) but unfortunately while ignorant people persist in blaming a “breed” or “type” of dog as being at fault as opposed to actually investigating these incidents and figuring out what is triggering these types of attacks from dogs that have not previously shown any signs of aggression we’ll be no closer to coming up with suitable responses as opposed to this nonsense Bsl.

Once again the dogs involved are not pit bulls nor do they even remotely resemble pit bulls yet another tragic incident involving non pit bull type of dogs and again breed specific legislation does nothing to address deaths like this one?

Gladys Alexander, 92-years old, was attacked by up to four large dogs after entering a neighbor’s home .

Gladys Alexander, was brutally attacked by up to four dogs after entering a neighbor’s home to give her a newspaper. Pit bull-lab mix (2), Lab-pit bull mix (2)

While these dogs may well have been pit bulls there’s no actual evidence other then the owners word and if this person was saying they weren’t pit bulls they’d be called a liar and the fact is there’s not one recorded attack that was triggered by the “breed” or “type’ of the dog.

Bessie Flowers, 86-years old, was fatally attacked by her daughter’s two pit bulls. Flowers was visiting her daughter’s home in south Charlotte when the deadly attack occurred. Flowers was on the back porch heading into the home when she slipped or tripped onto the dog bed.

The fact is the dog involved in this attack was another mixed breed mutt and yet again a dog that had not previously displayed any aggressive tendencies.

Sonda Tyson, 66-years old, was brutally mauled to death by her own dog., Pit bull-bullmastiff mix

Sebastian Caban, 3-days old, was killed by a pit bull-mix while lying in bed with his parents and the dog.

Manuel Mejia, 49-years old, was killed by a pack of dogs

By and large in 2016 the majority of dog bite related fatalities involved mixed breed mutts of no specific heritage.

Adonis Reddick, 45-years old, was fatally attacked by his own pit bull.

Another attack alleged to have involved pit bulls but typically again the owners word was taken as gospel in spite of the fact he had no formal canine identification credentials and took the word of the seller as to breed type etc and we all know some people misrepresent dogs as being pit bulls trying to make money.

Earl Stephens Jr., 43-years old, was killed by a pit bull and its two younger offspring while visiting the owner’s home on June 4, 2016.

Hunter’s case is yet another in a long list of fatalities where the dog’s “alleged” breed has been used as an excuse to get away with being a poor parent and an inadequate carer blaming a breed or type of dog for your own poor decisions is the true definition of cowardliness.

Hunter Bragg, 7-years old, was brutally killed by a pit bull while visiting his father at the owner’s home on June 4, 2016.

Another tragedy involving mixed breed mutts this lady was serving papers and inadvertently entered a yard full of dogs and paid the ultimate price, breed specific legislation could not have prevented this tragedy either.

Is it any wonder breed specific legislation has no discernible affect on dog bite fatality statistics considering the problem is obviously mixed breed mutts not any one or “specific” breed/type?

Mixed breed mutts again and yet the anti pit bull lobby insist on further endangering the public by promoting legislation which ignores the human fatalities involving mixed breed mutts unless they look like pit bulls.

This attack is alleged to have involved a pack of pit bulls but once again there’s no actual legitimate evidence supporting the claims regarding the breed of the dogs involved which were more then likely mongrels.

Kayden Begay, 3-years old, was struck down by a pack of pit bulls
[source citations]

Again a fatality alleged to have involved pit bulls whereas the pictures show mixed breed mutts again with breed verification by the owner again owners are often mislead when purchasing or acquiring pet dogs as often the seller will tell the prospective buyer exactly what they want to hear in order to sell a puppy.

Another instance of dogsbite.org’s willingness to take the word of owners in spite of the pictures indicating otherwise.

Elizabeth Rivera, 71-years old, was killed by up to four family pit bulls in her southwest Detroit home on July 16, 2016.

Elizabeth Rivera, 71-years old, was mauled to death by up to four family pit bulls

As you can see dogsbite.org consider Facebook , in particular owners Facebook pages to be a legitimate source for their statistics and again these people believe the person that sold them the puppy and told them it was a pit bull was telling the truth whereas any other time pit bull breeders and owners are all lying scum.

Those dogs are not American Pit Bull Terriers.

Michelle Wilcox, 30-years old, was fatally attacked by a male pit bull belonging to her boyfriend on August 1, 2016.

Michelle Wilcox, 30-years old, was mauled to death by her boyfriend’s pit bull

How many people have to needlessly lose their lives to attacks involving mixed breed mutts before these people see sense and support breed neutral legislation which protects the community from all dangerous breeds and types of dogs and not just those that look like pit bulls.

Derion Stevenson, 9-years old, was attacked by a pit bull-mix while visiting the dog owner’s home on August 17, 2016.

Now Dogsbite.org obviously got their information from the owners Facebook page when identifying these dogs as they’re not pit bulls clearly they very closely resemble the dogs involved in the daxton Borchardt tragedy which were boxer mixes.

Unknown breed again obviously not a pit bull or the media would have let us all know?

Once again dogsbite.org’s source is the “dog owners fiancee’s Facebook page” and I agree the dogs look like they may have pit bull in their heritage but are they American Pit Bull Terriers?

Piper Dunbar, 2-years old, was found dead in her front yard by a search-and-rescue team. Topeka police Lt. Bryan Wheeles attributed her death to a dog attack. Authorities seized two dogs that were in a fenced-in area at the home (in the back yard) .
[source citations]

Doberman’s were banned in the 70’s in a similar hate campaign as we see now against pit bulls this tragedy again a mixed breed mutt.

Another mixed breed mutt being declared to be a pit bull by it’s non expert owner and dogsbite.org accept that as legitimate investigative techniques when no actual investigation other then trolling the owners Facebook page was actually undertaken.

Isaiah Franklin, 6-years old, was mauled to death by a family pit bull at his home in Huntington on December 2, 2016.

Add another to the list of victims of mixed breed mutts in 2016.

Deaths involving non-dog bite injury, minor dog bite injury or cases that lacked a “reasonably clear” determination of death due to dog bite injury are not included in DogsBite.org statistical fatality data. Victims falling into the latter category may be added at a future time.

Dogsbite.org pays the scam artist fraud Merrit Clifton to prepare their custom made statistics specifically tailored to bring about pit bull extinction and it’s all being driven by hate, vengeance and greed the fact is the only people they are helping is themselves Colleen Lynn and Lynn Media are paid for hosting all the Anti Pit Bull Lobby’s hate websites and Merrit obviously get’s paid to prepare his scam so called statistics.


Below is a typical post from Dogsbite.org’s Facebook page and as you can see they consider pet owners pictures they’ve stalked off Facebook as being evidence, only when they’re saying what dogsbite wants to hear of course and the irony is none of them dogs appear to be actual American Pit Bull Terriers.

January 10 at 7:42am ·
72% of all dog bite fatalities in 2016 had breed identification images. (That’s a lot!) DogsBite uncovered 29% (6) that otherwise were not published in the media. Combined pit bulls, American bulldogs and their mixes represent 86% of all breed ID images #Breed #FatalDogAttacks

Colleen Lynn has had absolutely no formal training and/or education in either the animal or canine areas and Merrit Clifton has had no formal training in data assembly and or correlation he’s a second rate ex journo making a living of the deaths of hundreds of thousands of pit bulls annually.

One thought on “Dogsbite.org using emotive meme’s, propaganda and fake statistics to scam the public…..”