Now it’s claimed that even a person of average intelligence can identify a pit bull whereas the truth is that pit bull haters consistently intentionally mis-identify dogs as being pit bulls specifically dogs involved in attacks with their alleged “pit bull” statistics including numerous victims of non pit bull type dogs.

(one 10 year old boy has been included as a pit bull victim because his pet pit bull was with him when he was hit by a train.) 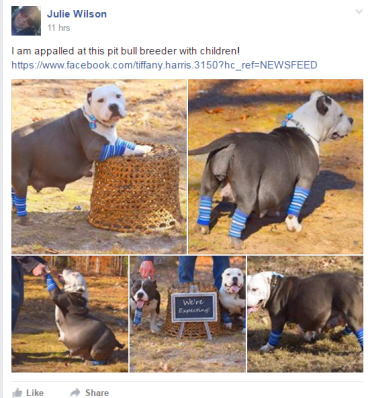 Now as you can see Julie Wilson either can’t identify pit bulls or she is being intentionally deceptive which comes as no surprise with people like this they promote lies and disinformation all in the name of community safety whereas the truth be known their world revolves around hating pit bulls.

Dana Renfrow my stalker obviously couldn’t identify a pit bull if her life depended on it or does she know better but chooses to lie through her ar*e.

Just for you and your hater mates Dana maybe you could try doing a bit of research prior to making yourself look like such an imbecile.

From Wikipedia, the free encyclopedia
The American Bully is a recently formed companion dog breed,[1] originally recognized by the American Bully Kennel Club (ABKC). It has been recognized by the United Kennel Club (UKC) since July 15, 2013.[2] It is a small to large breed which has been divided into four categories; Pocket, Standard, Classic and XL.

Founded in the United States between 1980 and 1990, the American Bully was produced using a foundation of American Staffordshire Terriers and American Pit Bull Terrier. Was created with the purpose to be the ultimate family’s companion dog.[3][4]
While some of the founding kennels, namely Razor’s Edge owner Dave Wilson, affirmed that used only these breeds to produce the desired dogs, it is speculated that five other breeds were used to attain the more “bully” physical traits desired. These are best guessed to by the American Bulldog, English Bulldog, Olde English Bulldogge, Staffordshire Bull Terrier and French Bulldog.[5]
The initial desire for this breed was to produce a dog with a lower drive than the American Pit Bull Terrier, while also displaying more of the “bully” traits than the American Staffordshire Terrier. Mass and heavy bone was prioritised to ensure such a look, and due to this many of the dogs shown today display the wide front for which they were originally bred.
The breed was first recognised by its breed club, the American Bully Kennel Club, in 2004.[6] This registry first acted as a means to document pedigrees and show the breed against its written standard.

None of these people are experts they’re all fanatical pit bull haters and they support a legislation that even if successfull will only prevent 64% of the dog bite related fatalities leaving the other 36%  of victims to fend for themselves.

The fact is under breed specific legislation 128 victims have in essence been sacrificed by these people in order to make pit bulls extinct and to put that into perspective that’s one victim (generally children or the elderly) per month every month for the last ten years.

These people demonstrate daily that they are not victims advocates they are pit bull hating fanatics period, end of story.