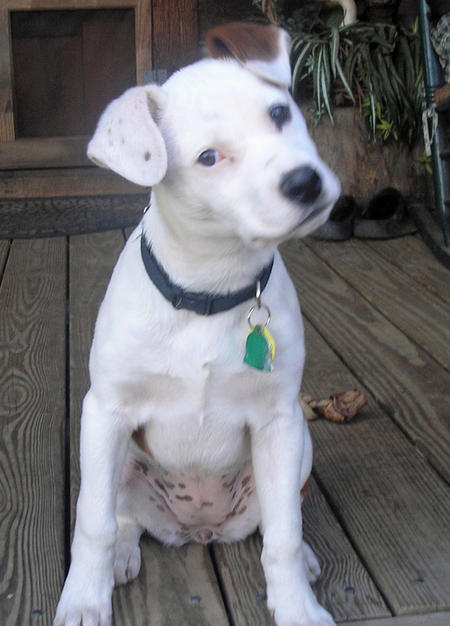 I used to think pit bulls were born mean.

I had never met one, but I accepted the opinions of my parents and the adults around me. I didn’t question the prejudice, despite a lack of evidence.

Looking back, I recognize my prejudice originated no differently than other types of bigotry. Last week, Matador raised similar prejudice and stereotype issues in Leigh Shulman’s article “On the Front Porch with a Gun, Waiting for the Black People to Come” and Ricardo Arthur’s “Barraku: Black Culture in Japan”.

My attitude towards pit bulls didn’t change until I met my now-husband.

In a discussion about possible future pets, my husband said the only dog he would consider adopting was a pit bull. I questioned his reasoning, only to grow ashamed when he described all the positive, loving experiences he had with the breed.

I fell in love.

I learned that violent acts attributed to pit bulls are not innate to the breed; violence is a manifestation of the way pit bulls are treated and raised. Despite the media’s portrayal of the breed as inherently aggressive dogs with a proclivity towards fighting, pit bulls will not act more aggressively than any other dog if not abused.

2) Strong desire and determination to please their owner.

Cosmic intervention brought our pit bull, Zoey, to us. A vet technician acquaintance told us about a really sweet dog about to be euthanized. Zoey had been abused, neglected, and left to die in the street after being run over by a car.

Despite her cruel beginning and months of physical rehab, she is the sweetest, happiest dog I’ve ever known. Check out the recent “Meet Matador Pets” article for an example.

Since adopting Zoey 18 months ago, I’ve spent even more time researching the breed and connecting to other pit bull owners and rescue organizations.

I’m saddened when pit bulls are associated solely with hardcore gangsta rap, Sarah Palin, and Michael Vick. I cringe whenever someone uses the term “pit bull” as a descriptor for aggressive tenacity; it’s not only ignorant, but that bad word in writing: cliche.

Pit bulls in the news

Historically, the pit bull was championed as a family dog. Petey from the Little Rascals was a pit bull and Helen Keller’s dog was believed to be a pit bull. Understand-a-bull.com keeps a list of heroic pit bull stories and Cesar Milan published a list of celebrity pit bulls.

Karen Delise, founder and director of research at the National Canine Research Council, has been researching fatal dog attacks for 20 years.

She obtained official documents and data from as far back as the 19th century and interviewed animal control officers, police, and medical examiners to complete two books on dog attacks and pit bulls, “Fatal Dog Attacks: The Stories Behind the Statistics” and “The Pit Bull Placebo: The Media Myths and Politics of Canine Aggression”.

There was no evidence of a particular breed or type of dog behind the majority of dog attacks.

In temperament tests conducted by the American Temperament Test Society, pit bulls received a passing rate of 82% or better- compared to only 77% of the general dog population.

Even pit bulls that have been fought are still not permanently aggressive. After the football star Michael Vick pleaded guilty to conspiring to run a dog fighting operation, officials confiscated 50 pit bulls on his Virginia property.

The dogs had been chained to car axles. The ones that didn’t fight were beaten, shot, hanged, electrocuted, and drowned. Many people, including animal rights groups, called for the animals to be euthanized because of their alleged vicious nature.

Instead, U.S. District Judge Henry Hudson ordered each dog to be evaluated individually, not by breed stereotype, and required Vick to contribute one million dollars to the dogs’ lifelong care.

Only one dog was found to be too aggressive to save and had to be euthanized. Another was too injured to keep alive.

The other 48 dogs were placed in foster homes and animal sanctuaries, with a handful being adopted.

Despite their past, the dogs recovered from the torture. According to a St. Petersburg Times article about Michael Vick’s former dogs:

More than a year after being confiscated from Vick’s property, Leo, a tan, muscular pit bull, visits cancer patients as a certified therapy dog in California. Hector, who bears deep scars on his chest and legs, recently was adopted and is about to start training for national flying disc competitions in Minnesota. Teddles takes orders from a 2-year-old. Gracie is a couch potato in Richmond, Virginia, who lives with cats and sleeps with four other dogs.”

Denver, Colorado banned pit bulls in 2005. As of March 2009, the city of Denver euthanized at least 1,667 pit bulls in gas chambers. Pit bull owners had two choices when they enacted the ban: inhumanely euthanize their family dogs or send them away.

Denver is not the only place that’s passed BSL.

Pit bull owners had two choices when they enacted the ban: inhumanely euthanize their family dogs or send them away.

Cities and regions across the US, Canada, and 14 other countries have banned, restricted or are considering breed specific legislation. Air France, Continental Airlines, and British Airways also embargo pit bull type dogs on their flights due to safety concerns.

The laws may originate out of concern for public safety, but BSL hasn’t worked and doesn’t work for six reasons

1) Dog attacks aren’t disproportionately pit bulls; it only seems that way because of media portrayal.

Pit bull at the pound- meagan

4) Defining breeds is problematic. A dog can still be defined as a pit bull or other banned breed if they carry certain physical characteristics, even if the dog is a mixed breed. The pit bull breed, for example, can encompass the American Pit Bull Terrier, American Staffordshire Terrier, dogs with mixes of these breeds, even the American Bulldog and Bull Terrier.

5) It’s more expensive. According to Prince George County’s assessment of BSL, it costs $68,000 to confiscate and euthanize a single pit bull. Gas chambers, like those in Denver, lessen the economic blow, but millions of dollars are still spent enforcing the ban. Those dollars could be allocated to promoting responsible pet ownership, punishing abusive owners, and contributing to other important issues like education and health care.

6) 4 million dogs are euthanized per year in the United States. With BSL, dogs are confiscated that actually have homes, adding to the number of dog deaths per year.

Outlawing and discriminating against pit bulls and other breeds is shallow and harmful. Negative group think and propaganda is no reason to hold a prejudice based on race, gender, religion, nationality…or breed.

What you can do:

Adopt a pit bull if you believe the breed works for your lifestyle.

Follow these tips to see if BSL is being proposed in your area.

Write your congressman about the issue.

Visit these websites and blogs for more information:

How do you feel about BSL and pit bulls? What associations do you have with pit bulls?